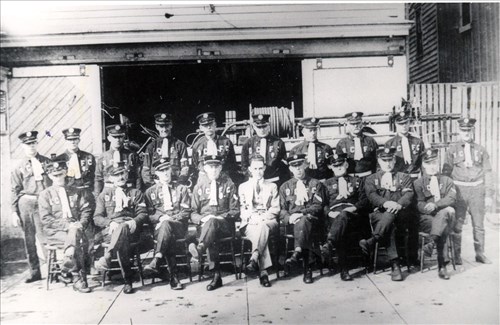 In the early morning hours of January 7, 1887, a fire started in the back of Holliday’s Poolroom on lower Clinton Street and spread quickly before it was discovered. It raced completely out of control. The city fathers held a quick meeting and voted to telegraph the Wilmington Police Department to request fire equipment and assistance.

The Fame Volunteer Fire Department and Reliance Volunteer Fire Department, both of Wilmington, loaded their horses and horse drawn equipment aboard railroad cars and rushed to help the Delaware City people who had already formed bucket brigades. The rescue was hampered, however, when one of the fire horses broke his leg coming off the railroad car. Before the blaze was extinguished, several buildings were burned down. After the last spark was out, the townspeople gathered and voted to support their own fire company. William Hutchison was elected Fire Chief and Charles G. Ash was elected President on March 17, 1887. The new firemen called themselves the “Volunteer Fire Company.” They immediately purchased a hand-operated, hand-drawn pumper from Smyrna. The apparatus required forty able-bodied, long-winded men to operate her and was given the nickname of “Old Hanna.” She was based temporarily in an ice-house located at Delaware and Washington Streets, until more suitable quarters were provided at the Town Hall on Clinton Street.

On January 23, 1889, the firemen had second thoughts about their name and voted to change it to the Delaware City Hose Company. At that meeting William F. Neff was elected Fire Chief and James A. Mulligan was elected President.